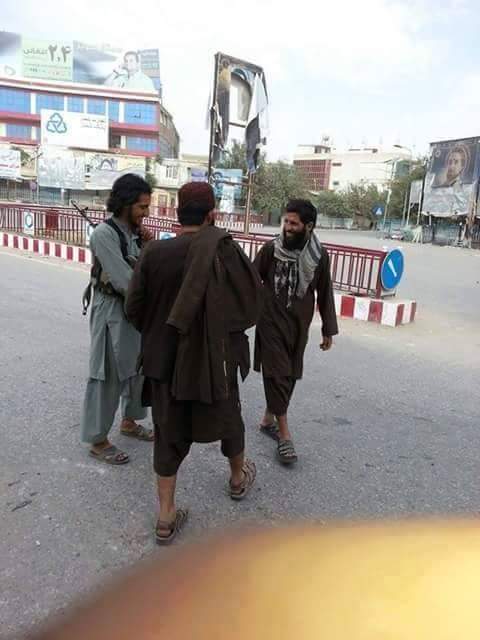 Taliban in the centre of Kunduz (Via Sabiq Jihadmal)

Taliban also claimed, “Mujahidin shot down a US cargo plane in Jalalabad overnight, 15 invaders + several hirelings killed” during Operation, Azm (Resolve). Air Force Times reported, “six U.S. airmen and five civilians were killed when a C-130J crashed Friday shortly after takeoff at Jalalabad Airfield” adding “while the crash is still under investigation, enemy fire is not suspected as a factor, the news release says.”

Balkhi also called out Associated Press journalist, bureau chief in Kabul, Lynn O’ Donnell for conducting an “exclusive phone call with fantasy? leader” regarding the fall of Kunduz. She claimed to have spoken to Mullah Akhtar Mansoor with quotations. Balkhi was having none of it and tweeted AP stating that “a report of conducting a phone interview with Amir ul Mumineen, Mullah Akhtar Muhammad Mansur (HA) is fabricated”.  He added, “Amir ul Mumineen has not contacted nor given interview to any news outlet.” O’Donnell’s article can be read here,

Horia Mosadiq campaigns for the rights of women in Afghanistan

“the harrowing accounts we’ve received paint a picture of a reign of terror during the Taliban’s brutal capture of Kunduz this week. The multiple credible reports of killings, rapes and other horrors meted out against the city’s residents must prompt the Afghan authorities to do more now to protect civilians, in particular in areas where more fighting appears imminent,”

Balkhi claimed Amnesty Online had “lost all credibility” once they “threw in western fantasies of gang rape, tsk, tsk”. Balkhi called the report “baseless” saying there were “no rapes/execution/looting”. The Taliban spokesperson continued his condemnation tweeting,

Balkhi suggested that both Amnesty and Lynn O’Donnell “need immediate help” and “perhaps a meeting with these psychiatrists”.  In a moment of pure satire, he then posted a video of British comedians Stephen Fry and Hugh Laurie, the content described as, “two psychiatrists both analyse each other at the same time, while none of them agrees to be the patient”, see following link,

“A Bit of Fry and Laurie – Psychiatrists”

Both the Amnesty International statement and Islamic Emirate denial can be read in the “Links” section.

It is dangerous to assume that because a report comes from a human rights organization it must be correct or that any denial from an insurgent group must be disbelieved. Polarization can be very misleading. Amnesty International was founded with good intentions and has carried out some great work over the years but more and more it is in danger of losing a grip on reality and being too closely tied in to wider political agendas.

Several years ago the group was approached by phone and email to investigate allegations in the UK of serious human rights abuses which involved unlawful experimentation at the hands of the state similar to that carried out under the Nazis at Auschwitz. This lead to the unlawful killing of around 2,000 British citizens and caused harm to 2,500 more individuals and their families. It was an issue covered up for years by successive governments due to civilians being DELIBERATELY harmed. The state violated laws, lied, shredded documents and hid their wrongdoing (now finally admitted in parliament with an apology given by David Cameron) and promise of further help to victims whilst still managing to avoid a full and open public inquiry. For years both the British and US Government created a false narrative to hide their tracks which relied heavily on media accepting their official statements without question. Amnesty was one of the organizations that repeatedly obliged.

During a phone call the group refused help and support to dying victims claiming they concentrated on cases abroad as there “were no human rights abuses in the UK”. From that day on they lost much of their credibility and will hopefully be brought fully to account in the future.

With regard to Afghanistan, all CREDIBLE reports of human rights abuses must be investigated. Where allegations are made against the Taliban, firstly those reporting must ensure that the persons allegedly involved are actual Taliban. There are a number of recorded incidents where others have used their name to either deliberately discredit particularly when Taliban makes advances in war. Some have impersonated the Taliban for personal financial gain such as certain extortion cases in Pakistan where letters were forged claiming to be from the group, those responsible were later exposed.

Over the years the timing of such reports  has been eye opening. Reports of “poisoning” of girls are automatically attributed to the Taliban when they could well be the actions of Taliban enemies or not poisonings at all. Mass “poisoning” of schoolgirls for example could be down to crop fumigation in the region as recently highlighted in Pakistan or even vitamin supplements being wrongly prescribed which led in one case to many schoolgirls suffering severe stomach cramps mistaken for poisoning. Where there are allegations, it is important to establish the cause then make sure every effort is made to identify actual culprits and reason behind an incident.

As stated, Horia Mosadiq is quoted several times within the Amnesty statement dated 1st October 2015. What is most strange is that although there are a number of allegations against the Taliban from sources whose names are withheld, the report seems extremely biased. There is no mention whatsoever of the two statements issued by Islamic Emirate regarding the take over at Kunduz clarifying that all fighters must respect civilians and do all they can to avoid casualties. They are encouraged to carry on with their work (though clearly this is difficult in a conflict zone).

Back on 28th September, Amnesty stated,

“reports that the Taliban have already sent armed fighters into a public provincial hospital are extremely worrying. Hospitals are places of sanctuary under international law and their staff must be allowed to do their vital life-saving work without the threat of violence or undue interference.”

Vice News that appeared to have been in contact with staff at the local hospital in Kunduz stated,

‘They just visited our rooms. They didn’t harm anybody and didn’t damage anything. They left soon after,’ said the official, who declined to be identified as he feared repercussions.”

Ironically the tragic news has just come in from Afghan journalist Ali M Laatifi that who tweeted,

Aerial bombing in #Kunduz kills at least three staff of @MSF at trauma centre, where 105 patients and their caretakers were at

The @MSF trauma centre in #Kunduz was hit by aerial bombings at 2:10am, three staff killed, 30 unaccounted for

Since fighting broke out in #Kunduz on Monday, @MSF has treated 394 wounded in their trauma centre

Lets hope that Amnesty International will work to hold whoever is responsible to account.

Whether Mosadiq authored the full Amnesty statements on Afghanistan in recent days is unclear. There is no doubting her disdain for the Taliban and she makes it clear on video she does not welcome any form of reconciliation with the Taliban urging women in the UK to write letters to make their stance known. Her biography on Huffington Post reads,

“she was a child growing up in Herat province when the Soviets invaded Afghanistan in 1979. Soon after the fall of Dr. Najibullah’s government, she was forced to stop her studies at Kabul University and leave Afghanistan. She subsequently obtained a Master’s degree in Public Relations from Berkeley University in the United States of America. For the past 20 years, she has had a successful career as a journalist, political analyst, and has led several human rights groups in Afghanistan.”

Mosadiq went on to work for United Press International (UPI) purchased in May 2000 by the Unification Church’s media corporation, News World Communications. She appeared in a video, Horia Mosadiq on “Religious Fundamentalism and its Impact on Women and Girls in Afghanistan” Women, Religion and Religious-Right Panel see following link,

The event was chaired by Julie Bindel a radical feminist writer who according to one video “openly called for men to be put into concentration camps and eradicating heterosexuality”. Bindel stated,

“I mean I would actually put them all in some kind of camp where they can all drive around in quad bikes, or bicycles or white vans”

“Women who want to see their sons or male loved ones, would be able to go and visit, ot take them out like a library book, and then bring them back.”

Perhaps some of Bindell’s ideas may have rubbed off on Mosadiq? The Taliban may be labelled by some as extreme in their attitude towards women but Bindell’s views are seen by many in the UK as somewhat extreme towards men.

“Afghanistan: Harrowing accounts emerge of the Taliban’s reign of terror in Kunduz”

“Afghanistan: Remarks of spokesman of Islamic Emirate regarding report by Amnesty International”