Pakistan’s hypocrisy over education, from Malala to the Khan kids and the students of Shaktoi

When a young girl was targeted by the Taliban in Pakistan on October 9th, 2012 there was a worldwide outcry. The media was full of the horror of the attack and that Malala Yousafzai age 14 was shot “for going to school” denied an education. First of all I strongly condemn the violence of this act but point out that the majority of press misreported the incident. Malala was singled out not for following her dream of learning but because she and her father Ziauddin were seen by Pakistan Tehreek-e-Taliban (TTP) to be betraying Islam. They were viewed as “spies of the west” following their meeting with US Ambassador Richard Holbrooke when Malala was 13 and participation in filming with foreign journalists in which Taliban were heavily criticised. Malala was put forward by her father to write a blog for the BBC from aged 10, highlighting the school he ran which drew attention to his daughter.

“She used to propagate against mujahideen (holy warriors) to defame (the) Taliban. The Holy Quran says that people propagating against Islam and Islamic forces would be killed.”

“We targeted her because she would speak against the Taliban while sitting with shameless strangers and idealized the biggest enemy of Islam, Barack Obama.”

“We did not attack her for raising voice for education. We targeted her for opposing mujahideen and their war,” said the Taliban.

“Shariah (Islamic law) says that even a child can be killed if he is propagating against Islam.”

Malala’s father who ran the Khushal Public School in Pakistan became the educational attaché of Pakistan in its consulate in Birmingham when they relocated to the UK following the shooting. He is now UN Special Adviser on Global Education.

The Taliban story of “denying education” is used time and time again often to bring in money whilst at the same time others in a responsible position in the government and institutional bodies of Pakistan have a much greater role in reality denying kids an education. The Taliban are far too busy engaged in fighting with the Pakistan military who instigated operation Zarb-e-Asb in 2014 to worry about chasing up girls going to school. What they do emphasise is the importance of providing an education in line with the teachings of Islam which for example can be obtained by Muslims at a faith school in the UK. However recently there has been panic from government and educational bodies as reported by the BBC that children were not being taught enough in schools about western “democracy” and “British values” (whatever that means) the man-made system of rule whereas Islam stresses the importance of Allah (God’s law) sharia. Education has become another battlefield.

The story propagated that Malala was shot for attending school suited the agenda of many, people. Some exploited their contact proceeding to make money out of her through articles, a book and films. Politicians and envoys used the schoolgirl to further political ambitions and sell their ideas for education in Pakistan. Malala became a “cause celebre” and went on to win the Nobel Peace Prize. Meanwhile her old school friends back in Swat continued with their education undisturbed, the media often failing to report that many children in Pakistan were losing out on learning not specifically because of the Taliban but through lack of investment in education and conflict within the country. Schooling stopped as thousands of children becoming Internally Displaced Persons (IDPs) and the army took over educational establishments as military bases. There was also the issue of prejudice and discrimination against some students such as those with disabilities. This brings me on to the Khan family, one of many examples of Pakistan failing its youth. 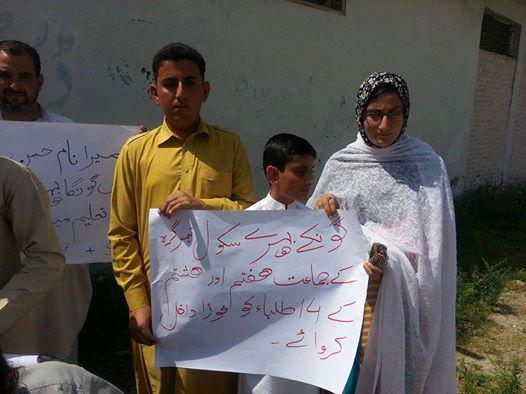 Hassan Khan is 12, he and his siblings all have speech and hearing impairments and are fighting for their rights to be recognized, to continue their education. He and his elder sister Summaya, 13 and younger brother Faisal, 10 are classed as having “special needs”. While some kids in the west “bunk off” going to school not realizing the value of a good education these kids are demanding some action on their plight. For the Khan family, when youngsters get to grade 7 they are unable to progress because classes are cancelled for those that are “differently abled” in Lower Dir, Khyber-Pakhtunkhwa. As Express Tribune reported, here are the words of Hassan from his Facebook,

“My name is Hassan Khan; I’m a deaf & dumb child. I was student of Government School for deaf and dumb Children in Timargara, Lower Dir, Khyber-Pakhtunkhwa. I passed the 6th class examination held during March 2015 and got promoted to Class-VII.

I and 14 other students have not been given admission because of lack of staff and facilities in my school. My question from the Government and public is: Is Education not my right?”

The full story can be read on this link,

“Where’s my class, no room for students who are differently abled”

These children have now been out of school for months despite the best efforts of a father who has knocked on many doors without success. Amir Zad Gul told News Lens, ““I want my sons and daughters to be responsible and educated members of the society.”

The Khan children have now resorted to teaching themselves which is both inspiring and sad. These kids deserve an education and yes it IS their right. Lack of space and staff has meant that 14 children in total are out of school.

“Where is my school. No school for special children beyond primary in KP. Is education the right of special Kids?” (Faisal Khan)

The right for children with special needs to be educated

Tks for flagging this. Pakistan a signatory to UN Convention on Rights of Persons w/Disabilities.

Britain gives differently abled people further protection through the Disability Discrimination Act which if not active in Pakistan may now be added to the Khans’ list of campaign aims for the government to introduce to their country.

Article 14 – the right to not be discriminated against in the enjoyment of your other rights.

“has a particular relevance to those with learning disabilities. Along with certain legislation such as the Disability Discrimination Act, this right helps to ensure that people with learning disabilities are not discriminated against because of their disability,in all aspects of life, including healthcare, job opportunities, the right to independent living, the right to services and support in the community.

Article 14, strengthened by the legal effect of the Human Rights Act, also helps to ensure that people with learning disabilities officially have equal rights and opportunities as everyone else.”

Whatever the practicalities regarding the Khans, the Khyber-Pakhtunkhwa government needs to get its finger out and act quickly. Hassan tweeted to Imran Khan (Chairman of political party Pakistan Tehreek -e- Insaf, PTI),

Dear Uncle @ImranKhanPTI I’m a deaf boy of Lower Dir KP. I’m out of school for the last more then 5 months. Your kind attention is requested

The #KP-Govt; leaves special children education to philanthropists & charity & itself does publicity ads

It has been 150th day, that I’m out of school. Striving for right to education. No one in the KP-Govt is there to listen & respond to me

“As the Govt not ready to establish school for us, we started classes at home and help each other”

Activists protest calling for their rights to be addressed

The horrific shooting of Malala gained her world -wide attention and as a result opened many doors. The Khan kids only known locally, struggle to get their needs addressed by those who appear to have double standards on education… However their fight will continue, Sonia Khan tweeted,

“education is first right of child without any discrimination,,,,,,,, then why discrimination with special children????” ……”I will fight for my and all the right of all marginalized neglected persons with disability.”

“I will get education any where, at any cost, will never give up!!! my struggle will bring change in the lives of PWDs”

“don’t worry madam, I’m as strong as a rock and will fight till the end, I have learned a lesson, that right ll always b snached”

Schooling under a tree in Shaktoi, South Waziristan. Who is accountable for how educational and development funds are spent? 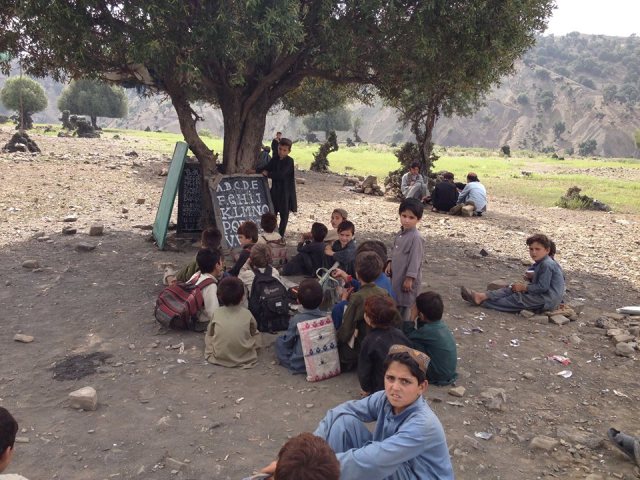 The Khans aren’t the only ones not being properly accommodated. A well known Tribal Area journalist (name withheld to avoid harassment) posted the following message on Facebook with some degree of sarcasm,

“amazing development in South Waziristan Agency. Govt, FATA Secretariat, Governor KPK, Pakistan Army and Political Administration claims of developmental works come true after watching following pictures of a school situated in Shaktoi area of South Waziristan where students attending a school under a tree planted by the govt with support of various donor’s funds who funneled billions of dollars for South Waziristan reconstruction.
No words to praise good pace of eating developmental projects funds.
These are pics of one school under tree, there are several false claims of govt require unveiling.”

There are many similar cases that I have seen over the years and the problems faced by children that are displaced by conflict would require a number of further articles to do the subject justice. Pakistan always seems to find money for nuclear advancement, weaponry and conflict but not to give a child his/her basic educational rights. Shame on Pakistan for their utter hypocrisy championing Malala when it suits whilst denying these kids a future. What does it do to a child’s self esteem having to plead for an opportunity open to many of their friends but told the same opportunity is not being given to them.

“For special children in KP, no schooling beyond primary”

For special children in KP, no schooling beyond primary