A hotel in the town of Sousse, Tunisia 144 kilometres to the south of the capital Tunis is alleged to have been attacked by one, possibly 2 gunmen according to security sources with unconfirmed reports of up to 38 dead. The resort is popular with both Tunisians and Europeans. The assault was said to be in the vicinity of the Imperial Marhaba hotel and there were reports of dead bodies lying on the beach and an unconfirmed image on social media purporting to show a man face down in the sand in what appears to be a pool of blood.

Amira Yahyaoui, who describes herself as “Human rights advocate and Founder @AlBawsalaTN – Yale World Fellow (proudly in Tunisia)” posted a series of tweets as the incident unfolded.

Fire exchange now inside the Imperial Park Hotel in Sousse, many people injured, no information about numbers of dead or injured.. #sousse

Second terrorist attack in Sousse in a year.. last one was in the beach with no casualties but the terrorist himself.

Terrorists entered the hotel through the beach, national media gives numbers between 6 and 13 dead so far.. #sousse

Horrible .. Ministry of Interior spokesperson : 19 dead in the terrorist attack against 2 hotels in Sousse-Tunisia (via @May_Mouna )

In @RadioShemsFm and @Jawhara_FM Ministry of interior spokesperon gives the number of 27 dead in the sousse attack.

One gunman entered the Marhaba Imperial Hotel in #Sousse armed with a Kalashnikov, opened fire on tourists 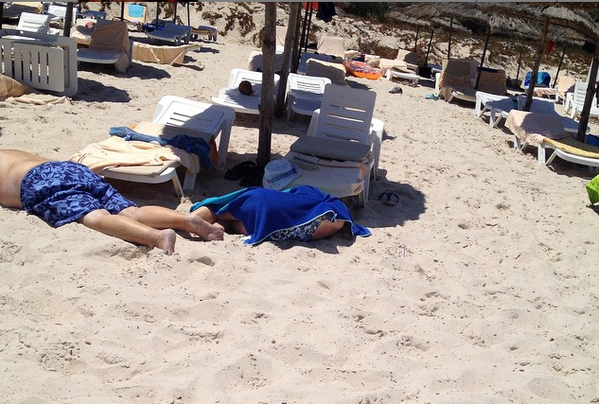 Picture shows alleged 2nd gunman (1st killed: ) from #Sousse attack in #Tunisia after arrest: (Images could not be independently verified)

Earlier this year, the Bardo museum in Tunis was the scene of an earlier attack by gunmen in March 2015, an attack which was claimed by Islamic State, see link,

However Tunisian authorities alleged the attack was linked to a local branch of Al Qaeda, Vice news reported,

Thomas Cook, holiday company which has customers in the area gave the following statement reported by ITV.

“At this time, details are not clear as to which property(ies) have been affected, with conflicting news reports.

“We are currently gathering information and will provide an update as soon as possible. Our teams on the ground are offering every support to our customers and their families in the area.

“We will continue to monitor the situation, working closely with the FCO and local authorities.”

Prime Minister David Cameron announced that the government’s emergency committee group Cobra will meet this afternoon chaired by Philip Hammond, Secretary of State for Foreign and Commonwealth Affairs to address today’s terror incidents in France and Tunisia. Cameron condemned the attacks saying “this is a threat that faces all of us.”

There have been 2 other attacks today, a man was decapitated at a gas factory in eastern France with others injured and Islamic State claimed responsibility for an attack on a Shia mosque in Kuwait during Friday prayers.