Calling the tune: Song release will highlight case of “Craigavon Two” an alleged miscarriage of justice

A record release by Pol MacAdaim a singer songwriter from County Louth will shortly highlight the case of an alleged miscarriage of justice, that of John Paul Wooten and Brendan McConville from Colingdale, Lurgan in County Armagh.

The two men are currently serving life sentences for the murder of Constable Stephen Carroll who was shot dead as he responded to a 999 call in Craigavon, Co Armagh, on March 9, 2009. Carroll was the first police officer in Northern Ireland to be murdered after the Good Friday agreement. Although Wooten (22) and McConville (42) lost an appeal against their convictions last year, supporters have continued to raise their voices.

Standing by the “Craigavon Two”

Gerry Conlon, who was wrongly convicted of the 1974 Guildford IRA pub bombing and released after a long campaign for justice

One man who campaigned tirelessly for the two men was Gerry Conlon who sadly died in 2014 after a period of ill health. Conlon was a member of the “Guildford Four” and spent 14 years in prison after being wrongly convicted of being an IRA bomber. In a Youtube video from 2013 in which he discusses the “Craigavon Two” Conlan said, “

“I read the depositions and read the case papers from the court hearing and it was appalling that two men could be sentenced to life imprisonment for the murder of a policeman on so little evidence, so little fact” (see link for full statement)

MacAdaim, who penned the song “Justice for the Craigavon Two” is a singer with a social conscience whose latest composition follows on from the “Ballard of Rachel Corrie” about a pro-Palestinian peace activist who died when she was mowed down by an Israel Defense Forces armoured bulldozer in Rafah in 2003. It is hoped that the message in the new lyrics detailing Wooten and McConville will be carried far and wide to draw attention to this controversial case.

Protest songs have a long tradition. In 1976, singer songwriter Bob Dylan drew attention to the case of American middleweight boxer Rubin “Hurricane” Carter who was imprisoned for murder in a case said to be “racially motivated”. The song is “credited with harnessing popular support to Carter’s defense.” Open Culture reported,

“Carter was tried and convicted twice (once 1967, again in 1976) for homicides that took place in Paterson, New Jersey in 1966 — despite the fact that there were no finger prints or eyewitnesses connecting him to the crime. (Both convictions were later overturned when courts found that the trials were tainted by prosecutorial misconduct.) Before the second trial, Bob Dylan met with Carter in prison and then wrote “Hurricane” a protest song that reached #33 on the Billboard chart” (see link)

Carter was eventually released after 20 years in prison and died in 2014 age 76. 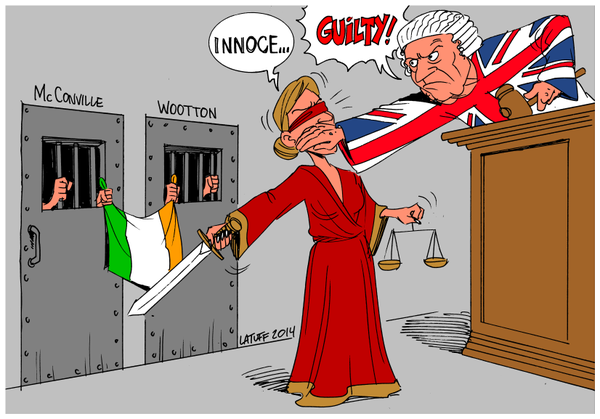 Lisburn councillor Angela Nelson, chairperson of the ‘Justice for the Craigavon Two’ group is firmly behind the single and stated, “the song will be launched on March 15th following the BBC Radio 1 official chart show and the group will campaign for the public to download the song over the following week.” Campaigners on twitter will play their part to promote the single using hashtags, #JFTC2 and #DownloadJustice The song will launch on St Patrick’s week to coincide with the fact that “solicitors for both men have lodged their questions to the Supreme Court in London.”

Widow of Stephen Caroll “shocked” at release of protest song

Opposition to the song

There is however some counter- protest. News Letter reported that, Kate Carroll the widow of Stephen Carroll was said to be “totally shocked” at the song release and last year described the case in court as the “biggest, blackest cloud” and “a long, arduous journey”.

“Unionist Politicians are calling for the Justice for the Craigavon Two song to be banned, the mayor of Craigavon has contacted the BBC and iTunes calling for freedom of speech and the right to protest to be overturned.”

Councillor Nelson pointed out, “what we are doing is not to add to her (Kate Carroll’s) grief, but nobody got justice that day.”

Power of the protest song

In her article “Return of the Protest Song“ Salalishah Tillet an associate professor of English at the University of Pennsylvania wrote in “Time” magazine of the revival and importance of this art form in focusing the public on the issues of the day. Tillet found that stirring lyrics of injustice can galvanize millions at short notice through the power of social media and states,

“young musicians, some famous, others grassroots are finding their role in this movement through a simultaneous revival and redefining of the protest song tradition.

An article in the Telegraph gives a link to the 10 Best Protest Songs listed as follows:

Meanwhile behind bars, Wooten and McConville will no doubt be eagerly awaiting to chart MacAdaim’s progress in his campaign efforts for the prisoners and find out if the public response to “Justice for the Craigavon Two” really will be music to their ears!