Karachi: Families take to the streets to protest abduction of Baloch women 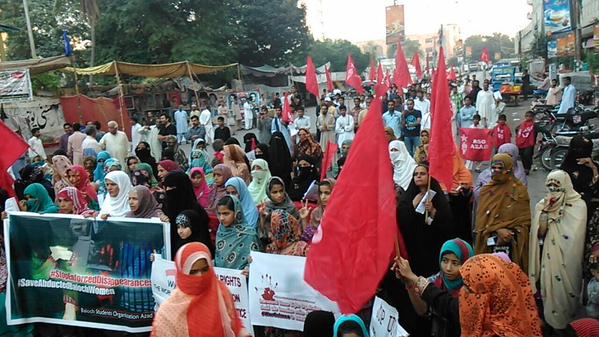 Women on the front line protest the abduction of their sisters

Demonstrators took to the streets of Karachi on Sunday 23rd November 2014 to express their growing concern for Baloch women that have recently gone missing allegedly abducted by Pakistani security forces.

Baloch nationalists have for many years fought for greater cultural, economic and political rights with some seeking full independence from Pakistan. This has resulted in a tightening of control and a clampdown by the state which the military argues is necessary to curb insurgency in the region. Activists accuse state agencies of serious human rights violations and fear for their lives.

Protesters appealed to the international community not to ignore their plight and to support the call for action on abuses and the fight for justice for those missing and harmed. A poster advertising the march urged intellectuals, doctors, lawyers, professors, students and human rights activists to participate in the rally to highlight those who have disappeared. The campaign took to Twitter under the hashtag #SaveAbductedBalochWomen

“three Bugti Baloch women along with their four teenage daughters and a son have been abducted by Pakistani security forces from Thondo Pusht near Asreli, Dera Bugti. 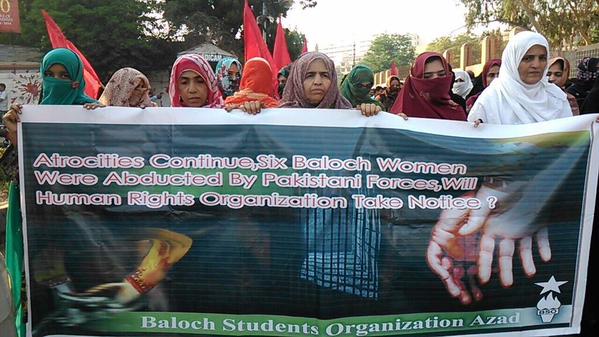 The number of abductions grow by the day

“the attack on Baloch women is attack on their dignity and honor because in the Baloch society women has a most respectable position and even in conflicts, women and children enjoy full immunity but the occupying and non-Islamic state of Pakistan and it’s forces have crossed all limits of atrocities against women”

Further details of specific cases can be read on the following link,

Entire families joined in the rally, with a throng of voices demanding to know,

“WHERE ARE OUR SISTERS COAS Raheel Sharif ?”

“WHERE ARE OUR SISTERS DG ISI Rizwan Akhtar?” 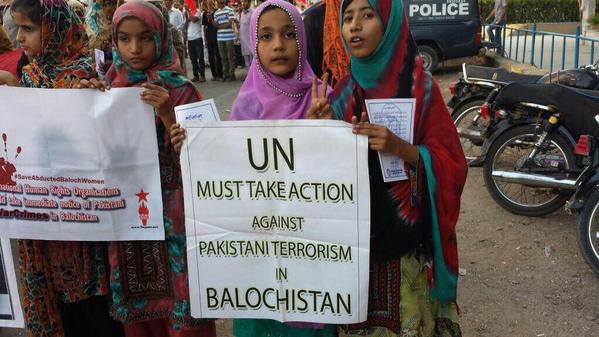 Being a child brings no guarantee of safety for Balochs

Enforced disappearances are nothing new, earlier this year the BBC brought to the world’s attention that “on 17 January, 13 bodies were discovered from a mass grave in the village of Tutak near Khuzdar in Balochistan province. Only two of the mutilated, decomposed bodies have been identified so far – both were men who had disappeared four months earlier” see link.

“Balochistan: The untold story of Pakistan’s other war”

It is very difficult for journalists to report from the region as many have gone missing, victims of an ongoing, abduct, dump and kill policy. Balochistan issues appear to be heavily censored in Pakistani media and outside the country there is little media coverage of the ongoing atrocities against civilians. The horrors inflicted are not limited to adults, there have been cases of children disappearing only to be found dead, their small bodies bearing evidence of torture

“according to registered cases with the Human Rights Commission of Pakistan, around 500 political activists are missing in Balochistan. An advocacy group working with the families of the missing, the Voice of Missing Baloch Persons, however, claims that the number of people is much higher”

Baloch social activist Pirdhan Baloch had this to say,

“Balochistan has been facing a severe human rights crisis for many decades. Around 3000 bodies of Baloch missing persons were recovered within an alarmingly short span. Forced disappearances of Baloch women, unlawful detention, torture, have shocked everyone in Balochistan. Pakistani atrocities on innocent Baloch women it’s like a nightmare. Baloch Women have always been the primary victims of war. Women lose their husbands, their sons, Baloch women defy state oppression by being on the frontline. Civilized world should speak up against Pakistan’s atrocities in Balochistan and abduction of Baloch women it is their moral responsibility.” 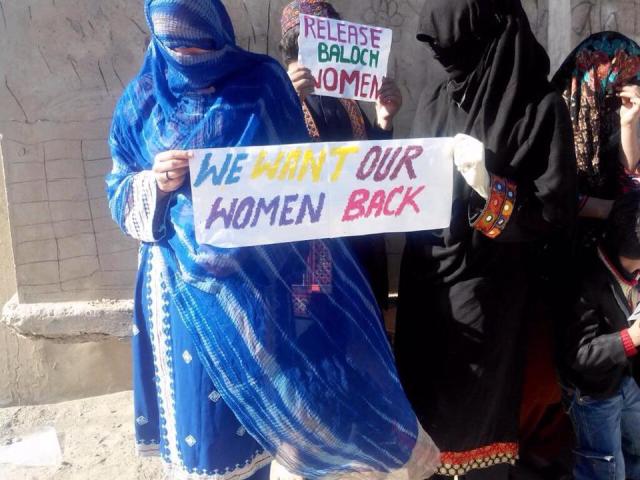 “Long march to protest state terrorism and the disappeared of Balochistan”