Playing cricket on the streets of Indian Occupied Kashmir

Frankly I know nothing about cricket (except my grandfather proudly played for the local village team at Greatham, northern England) however I do care about freedom of expression, so to hear that Kashmiri students are being accused of “sedition” for supporting the Pakistani cricket team makes me irate.

The students attending a university in the state of Uttar Pradesh were suspended at the weekend following the Asia Cup match where Pakistan beat India (don’t ask me the scores). They were alleged to have cheered each time an Indian player’s wicket fell, with some shouting “Pakistan, zindadbad” (“long live Pakistan”) which upset locals supporting the Indian team.

Kashmir has long been beset with tensions admit accusations of human rights abuses under  Indian Army occupation and many will see this harsh action threatening sedition (which can carry a 3 year prison term) as yet another attempt to stifle freedom of speech.

Pakistan is known to provide support to Kashmiris and has been accused by India of unlawful acts on Indian territory. So ongoing tensions bubble just beneath the surface in both countries and it doesn’t take much to spill over into something rather more serious.

Students protest over freedom of expression

An organization called Mission Bhartiyam that describe themselves as “a registered group of young professionals working in the fields of peace and harmony, human rights and environment” rose to the defence of the Kashmiri students. A spokesperson released a statement which was forwarded to me saying;

“It has been reported that about 60 Kashmiri students of a private university in Meerut, Swami Vivekanand Subharti University (SVSU) has been expelled for three days for celebrating Pakistan’s victory over India in a recent cricket match.

We strongly condemn this action of the university and consider it to be a clear violation of the freedom of speech and expression guaranteed by the Constitution of India. We also believe that arts and sports know no boundaries. Therefore, we condemn this intolerance that was shown by the authorities.

Therefore, we think that this action of the college authorities is arbitrary, autocratic, undemocratic and against the true spirit of the constitution of India and its long traditions.

We demand from the university to withdraw their action of expulsion of the students with immediate effect and to issue an apology to the affected students with the assurance that their respect in the campus will be restored and that they will not be subjected to any form of discrimination.

Our member of Mission Bhartiyam, Mr. Sandeep Mishra, Advocate Supreme Court will also write to the University in this regard”

There were a few humorous moments on twitter which relieved a little of the tension. One young man tweeted me saying, “ aren’t you English, isn’t cricket your national game? Or you invented it? Something like this.” (I wouldn’t know, I guess I should find out.) He appeared rather more concerned about my lack of knowledge on the subject than the fate of the poor Kashmiri students who according to Jammu and Kashmir Chief Minister Omar Abdullah, “don’t deserve to have charges of sedition slapped against them.”

Rauf Klasra tweeted, “should I expel my son from home who forcibly took me to Lords (UK), waited 4 hours on boundary line just to take Great Tendulkar autograph?” (Even I have heard of Tendulkar).

I imagine the Taliban watching all this with incredulity given their stance on cricket being a distraction away from Islam. Interior Minister Chaudhry Nisar Ali Khan had suggested on social media that the Taliban might like to swap their guns for cricket bats and offered to host a match to pave the way for peace talks. Thankfully dialogue has started up again after a postponement but the Taliban have declined the offer, seen as something of a “sticky wicket” or perhaps they fear ball rubbing!

Joking apart, I felt the need  to remind all people of common sense that Honduras and El Salvador actually went to war in 1969 over a game of football and cricket should not act as a flashpoint for violence

I prefer to reflect on “cricket for peace” (amazingly this is my second article on the sport) an event organized in October 2013 to bring people together rather than divide. The game and talent hunt in Peshawar  was attended by former cricketer Imran Khan, now Chairman of Pakistan Tehreek –e-Insaf (PTI) party and other well – known sporting personalities. This event was described as an initiative that “will give many young people a focus as they strive towards excellence in the sport. It is a breath of fresh air away from the horrors of conflict and towards a collective activity regardless of race, religion, gender, a community spirit to be enjoyed by all” https://activist1.wordpress.com/2013/10/13/cricket-for-peace-peshawar-fills-with-smiles/ 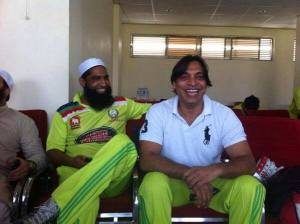 Let’s reflect on this statement, secure an apology for the Kashmiri students and get back to “cricket lovely cricket” as the song goes, penned by Calypsonian, Lord Beginner to celebrate West Indies first victory in England in 1950… (There you see, I do know something about cricket).