Shaker Aamer held for 12 years, never been tried, never been convicted and Tariq Ba Odah, in his 13th year at Guantanamo without charge, cleared in 2009, hunger striking for freedom

Activists wearing orange jumpsuits and black hoods will hold up placards in Trafalgar Square, outside the National Gallery, to mark the 12th anniversary of the opening of the Guantánamo Bay prison camp, and demand its closure.

The London Guantánamo Campaign [1] will host the demonstration, and speakers will include Jeremy Corbyn MP, Sarah Ludford MEP and Louise Christian, solicitor for former Guantánamo prisoners [2].

Aisha Maniar, a spokesperson for the London Guantánamo Campaign, says, “Twelve years on, the prison at Guantánamo Bay remains a stain on the current global landscape.

It is unfortunate that it has taken a near-fatal hunger strike by prisoners to remind the world, and Barack Obama, of his promise to close the facility. While a step in the right direction, recently renewed efforts by the US administration to reduce the number of prisoners and close the facility remain half-hearted.

“Where there is no risk to their safety, President Obama must ensure that prisoners cleared for release are repatriated immediately. In addition, periodic reviews of prisoners must be accelerated to ensure any further releases. Other states must step up their efforts by demanding the repatriation of their nationals and residents.

The British government can lead the way by using this anniversary to renew its demands for the return of hunger-striking British resident Shaker Aamer to his family in London. The time to act is now. There must be no more anniversaries.” 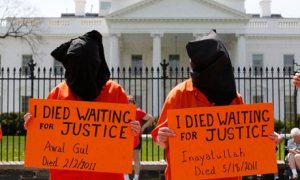 Earlier protest at the White House, Mos Def undergoes the horror of being force-fed

Today 11th January 2014, marks the 12th anniversary of the arrival of the first men to be detained at Guantánamo. Today, 155 men are still detained at the prison. Many of these men have been cleared for years but remain imprisoned, trapped by politics. More than half of the men are Yemeni, and despite the president lifting his self-imposed ban on transfers to Yemen last spring, not one has been sent home since 2010. Join us today at noon in front of The White House to demand President Barack Obama release Yemeni men from Guantánamo. He cannot meet his promise to close the prison until he does so. 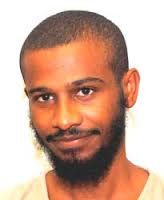 Emad Abdallah Hassan was ‘cleared for release’ in 2010, but continues to be incarcerated 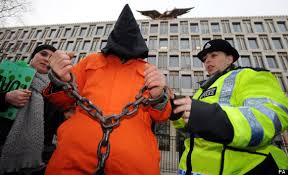 Andy Worthington: How to write to a prisoner 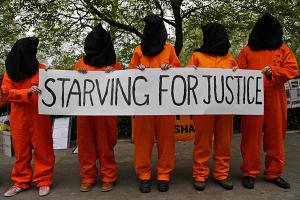 Carol Anne Grayson: The right not to be forcefed 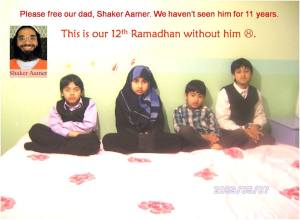 Why I went on solidarity hunger strike

Thanks to LGC and other activists for sharing images.