As Malala Yousafzai has told the media, that second when she was shot by the Taliban in Pakistan changed her life, (it is also changing the lives of others too), Malala has become a very marketable western commodity. My issue is not with Malala, I support and respect her wish of education for all, however (and it shames me to say this being British) I doubt she fully realizes the extent to which she is being exploited by her new “mentors” in the UK.

There is an element of risk to all now living in Pakistan since the US led War on Terror brought internal conflict to the region but there is only special treatment for some of those affected. Why not fly out every child harmed by US drones to the west for the most up to date medical care, there are plenty for wellwishers to assist.

Despite some victims trying to speak out on drones, for the most part we don’t even know their names, let alone details of injuries inflicted upon them. There are double standards on how terrorism is reported. Taliban terrorism is used to propel the “good west versus bad east” narrative in the media whilst US state terrorism is served up as “collateral damage” and is more likely to get buried along with its victims. All violence must be condemned.

Since the shooting of Malala, western politicians and media alike have seized upon a very profitable “alliance” with the young Pakistani schoolgirl. She fits comfortably into the well- worn narrative of “rescuing” women from the east. Let’s face it an entire war was waged according to some to “save” Afghanistan’s females from the Taliban. (Let’s hope Malala’s story will not be used to keep occupation going a little longer). What press usually fail to mention however is how Britain and its allies are failing miserably on “gender justice” back home.

Exploitation of women whether emotionally, physically, financially is so ingrained in our society and institutions that I am not even sure whether some men realize their actions. The old saying comes to mind… “in the valley of the blind, the one eyed ‘man’ is king”! Former Prime Minister, Gordon Brown, Malala’s avid supporter, fits that description. He is known as a misogynist by his former work colleagues and to human rights campaigners for his refusal to address the plight of widows whose husbands were unlawfully killed by the state see my earlier story https://activist1.wordpress.com/2013/07/25/malala-becomes-poster-girl-of-western-government-double-standards-on-gender-justice/

How many men do you see studying gender to work with women for greater equality though it would benefit society for more males to do so. Division of labour need not be problematic if given the same value for both sexes. The one man on my gender course at university was a young Pashtun man who was determined in his aim to improve the situation of women in the Tribal Areas of Pakistan whilst at the same time respecting the culture.

The special treatment of Malala is highlighting divisions in many ways. Week in week out, when I peruse the British press, we are subjected to articles about asylum seekers “ripping off” the UK. These stories show scant regard for torture victims coming to Britain that often end up being held in detention centres or virtually penniless in the community living on vouchers with limited access to health care. Yet one young lady is flown in to the UK and provided with the best possible care at the Queen Elizabeth Hospital, Birmingham appearing to bypass the hurdles faced by many. It would seem that there is something of a two tier system of care going on here and it is understandable that this will raise questions as to how we define a “deserving” case. I have met many juvenile survivors of torture, outspoken activists on human rights so what makes one person more deserving than another?

The commodification of Malala appears to have started at the time her father volunteered his daughter to the BBC to document life at school under the Taliban (this was before she was shot on a bus). She is seen on film at a younger age going to school and participating in lessons with her peers.

Media stories report that her father Ziauddin owns “for profit” schools which just happen to be high on the agenda of Gordon Brown, global envoy for education at the UN (again documented in my earlier article. One wonders why then, given that both Ziauddin and the BBC are so quick to warn of the dangers of the Taliban, they would put a child in the line of fire (albeit her identity thinly disguised) to write her diary for public consumption.

With regard to the question of another agenda, artist Jonathan Rao who painted the portrait of Malala that hangs in the National Gallery admits to his concerns in the Independent newspaper and states:-

“I guess I was worried that she was probably a pawn in a bigger game and was being unduly influenced by the people around her.”

The Independent points out that:-

Those people include Edelman, the global PR firm that manages Malala alongside its work for clients that include Microsoft and Starbucks. Jamie Lundie, an impeccably connected senior executive for the firm and former speechwriter for Paddy Ashdown when he was the Lib Dem leader, leads a team of five who work with Malala on a pro bono basis.

During a BBC documentary this week, Malala’s former friends are shown in Swat valley, Pakistan continuing their education. However there is fear among children in the region. Fox news reports the following words from school principle Selma Naz:-

“We have had threats, there are so many problems. It is much more dangerous for us after Malala’s shooting and all the attention that she is getting,” said Naz. “The Taliban are very dangerous. They have gone from Swat, but still they have a presence here. It is hidden, but it is here. We all have fear in our hearts.”

What is disturbing also is that we are told in the film which area of Birmingham Malala now goes to school, careless words given threats to target her once again repeated from Taliban. Can we assume she will not be targeted in UK?

Safety is pushed aside for “brand Malala”. There is Malala the book, Malala the film, Malala the award nominee, Malala the portrait, with the schoolgirl being skilfully marketed by Edelman, the world’s biggest PR company. Wavering a fee will no doubt be compensated by the value of the publicity she will bring to the company. I wonder, how many people can name the other girls injured when Malala was shot? What quality of care and support did they receive? Are they represented by PR companies?

All this stage management behind the scenes strikes me as far removed from the image portrayed on our screens of a simple, very bright girl, with a love for school standing up for her rights. We are now into the dangerous cult of celebrity. To ease the entry into western homes via multimedia, we are told Malala likes pop star Justin Bieber, is championed by actor and UN ambassador Angelina Jolie and what transition would be complete without the obligatory photo with a smiling David Beckham. With the “A” listers behind her, Malala’s future looks rosy. How different to the many women that have been harmed in Britain and received no such support.

It is fascinating to see the establishment prizes Malala is collecting including “Pride of Britain”. Will we see her projected from Quilliam next, sat beside former English Defence League (EDL) leader Tommy Robinson. Even to Tommy, she must surely be the acceptable face of Islam. Then of course we are gearing up for the Nobel Peace Prize with Malala a firm favourite to take the award. Putin’s heart must be sinking with Malala predicted to follow in the footsteps of champion of drones, supporter of targeted killings, President Barack Obama.

I can’t help but think of another Nobel nominee two decades ago, one Rigoberta Menchu. Like Malala she was thrust into the limelight, pressurised by others. She also wrote a book and appears to have been so eager to fit the expected narrative that she is alleged to have altered facts to project her cause, that of Quiche people in Guatemala. Ten years after the Nobel she was mired in controversy, though allowed to keep her prize. I quote a newspaper story in the New York Times  December 15th 1998:- 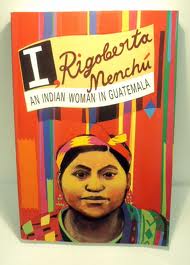 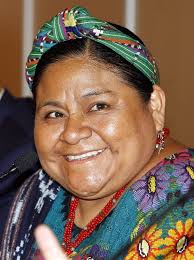 In the autobiography ”I, Rigoberta Menchu,” first published in Spanish in 1983 at the height of Guatemala’s brutal civil war, Ms. Menchu, now 39, tells a wrenching tale of violence, destruction, misery and exploitation as moving and disturbing as a Victor Hugo novel. So powerful was the book’s impact that it immediately transformed her into a celebrated and much-sought-after human rights campaigner and paved the way for her being awarded the Nobel Prize.

Key details of that story, though, are untrue, according to a new book written by an American anthropologist, ”Rigoberta Menchu and the Story of All Poor Guatemalans.” Based on nearly a decade of interviews with more than 120 people and archival research, the anthropologist, David Stoll, concludes that Ms. Menchu’s book ”cannot be the eyewitness account it purports to be” because the Nobel laureate repeatedly describes ”experiences she never had herself.”

Malala is a bright, articulate young woman. She comes across as caring and committed and has great potential to make a difference in this world finding her own route. She is not in the UK to boost careers or further the bank balance of those in the media. Those who claim to support gender justice should ask themselves why it is that some cases are projected into the media whilst thousands of other cases are suppressed by government including by one of the same politicians so supportive to Malala.

I recall one campaigner harmed by the state writing to Gordon Brown on his deathbed requesting a meeting in a last ditch attempt to obtain gender justice for widows left behind. The BBC spoke highly of this activist, noted how he “died a disappointed man” ignored by Gordon Brown. Such requests were repeated by others many times.

The support people receive after trauma makes a significant difference to how they recover and move forward in life. Malala has been surrounded by care, offered opportunities and her story given immense media coverage. That does not happen for most women. Many go unheard no matter how vocal they may be or what risks they take, they simply don’t fit in to a popular narrative, especially if victims of the state.

Malala should not be used as a diversion to distract away from other women that have been fighting in British courts for years to highlight injustice and the wrongdoing of government. This does not help the cause of any woman while one is exploited and others are being suppressed!

As an intelligent young role model, I don’t imagine Malala would want this. I would think all she wants to do is knuckle down and get on with her education and hopefully will be allowed to do so in peace.

142 Responses to “Brand Malala”: Western exploitation of a schoolgirl