BEIJING: WAS MAN WHO ALLEGEDLY DETONATED EXPLOSION AT AIRPORT BEATEN TO PARALYSIS BY POLICE? 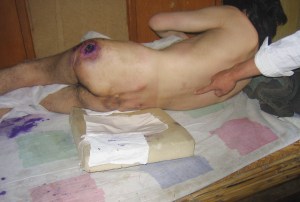 A man in a wheelchair is alleged to have detonated an explosion using firecrackers at the arrival hall of Beijing’s Capital International Airport today injuring himself and one other. Photos soon emerged on twitter of what seemed to be a lone protester, hands in the air waving a white object followed by images of an overturned wheelchair and a smoke filled building http://www.scmp.com/news/china/article/1287064/breaking-news-explosion-beijing-airport-one-may-be-dead-witnesses

So who is this man?

According to ex journalist/editor, Yifan Zhang, Beijing, he is Ji Zhongxing from Heze in Shandong province born in 1979.

The incident appears to have been an “act of desperation” after allegedly being beaten to paralysis,  disabled by police in 2005 for running an unlicensed tuk-tuk service and in debt according to a letter which appeared online. 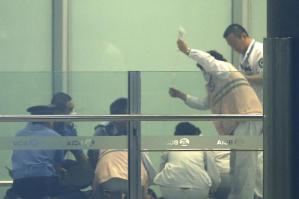 Ji Zhongxi’s last blog entry recorded these words…  “almost without hope, petition road endless”. The website appears to have been closed down… censorship soons kicks in. Journalist Mark Mackinnon from Globe and Mail reported that the media department of the airport is claiming that they are not even aware of the explosion. Any sign of the incident was quickly removed.

It is not unusual for state authorities to take a heavy hand with demonstraters as I found out during a trip to Beijing to join friends at an AIDS NGO conference in 2006 where I was due to be keynote speaker. I was scheduled to meet with lawyers and victims of China’s contaminated blood scandal… http://edition.cnn.com/2012/11/30/health/hiv-china-li  my subject, litigating against the state.

On arrival in China, I was greeted at the airport only to be told that my host Wan Yanhai, a prominent AIDS campaigner had been picked up by security services and detained. We spent the next three days trying to locate Wan who was dumped on the outskirts of the city only after he agreed to cancel the conference http://www.theaustralian.com.au/news/world/chinese-lock-up-aids-activist/story-e6frg6so-1111112595721

Participants that had travelled from all over China had to meet secretly in ones and twos in public places to share experiences as group meetings had been banned. We did manage to set up a stall handing out AIDS health education leaflets. We were about to be closed down but I persuaded local police to let us continue. They were sympathetic and did try to quietly accommodate. The compromise was that we had to move from the mainstreet to a side alley and give free condoms to those checking up on us. You could say,  our message got through but it was nervewracking.

Wan Yanhai later fled China for the US in fear of his life after pressure to close down Aizhixing Institute where he worked  http://www.nytimes.com/2010/05/11/world/asia/11beijing.html?_r=0  Another AIDS activist, friend Hu Jia (nominated for a Nobel  Peace Prize) was imprisoned for three and a half years http://www.bbc.co.uk/news/world-asia-pacific-13917882

Punishment and detention can be the price of speaking out in China and I now fear what more could be inflicted on Ji Zhongxi!